Since 2012, following Ali Edward’s example, I choose a word to focus on for the year. I think that it is such a great idea. I’ve never taken her OLW workshops or classes, because I feel I can live with my word without have the need for prompts and things like that. But in retrospect, I may need a reminder or a way to be deliberate about my word halfway through the year.

My word for 2014 was ‘elevate’ as in ‘elevate the everyday’. I managed to keep that word in the forefront throughout most of the year. But certain events (mostly people passing away and major international moves) derailed a lot of the plans and projects that I had mapoped out for myself at the beginning of the year.

So in the spirit of actually getting things done and also of accounting for impossible to predict events, I’m keeping my goals and resolutions to zero. I will tackle projects as they come along instead of having a list of things to accomplish. I want to approach each project when it comes and make sure I finish it. It was while I was thinking of this that my One Little Word for 2015 popped into my head.

v. com·mit·ted, com·mit·ting, com·mits
v.tr.
1. To do, perform, or perpetrate: commit a murder.
2. To put in trust or charge; entrust: commit oneself to the care of a doctor; commit responsibilities to an assistant.
3. To consign for future use or for preservation: We must commit the necessary funds for the project.
4. To place officially in confinement or custody, as in a mental health facility.
5. To put into a place to be disposed of or kept safe: committed the manuscript to the flames.
6.
a. To make known the views of (oneself) on an issue: I never commit myself on such issues.
b. To bind, obligate, or devote, as by a pledge: They were committed to follow orders. She committed herself to her art.
7. To refer (a legislative bill, for example) to a committee.
v.intr.
To pledge, obligate, or devote one’s own self: felt that he was too young to commit fully to marriage.

Please disregard the example for the first definition!! 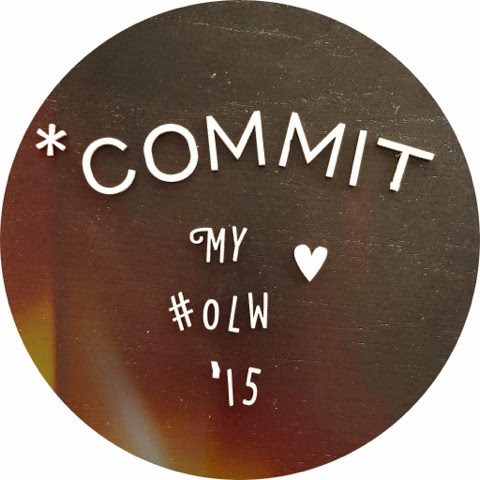